skip to main | skip to sidebar

Hello. I recently read a post in which a fellow referred to the "Portuguese Hi Power", saying that they were "built" in that country. Now and again, I've seen this same thing written about by others. Such claims are simply in error.

The fact is that no FN or Browning Hi Power has ever been manufactured in Portugal.

Kurt Wickman, who was one of the early 'smiths at Novaks, told me that some of the very best Hi Powers he'd ever seen were early "Assembled in Portugal" guns. When I asked why, he advised that FN sent folks to Portugal to make sure that their tolerances were held. Since I own both early and later-run "Assembled in Portugual Hi Powers", I examined examples of each. I can find no major differences at all! It would appear to me that either the Portuguese assemblers take pride in their work or have their "feet held to the fire" by FN, but I find no consistently measurable differences; the work remains very nice indeed. (As I understand it, the original reason for having the guns assembled there was simply lower labor costs.)

I shoot a lot of 9mm Hi Powers and have for right at four decades now. In my observation, current guns do not usually have trigger pulls that are either as light or break quite as cleanly as the older guns from the '60's, '70's, and even '80's but they group just as well or better! They definitely feed a much wider variety of blunt-nosed ammunition, ie: JHP's. 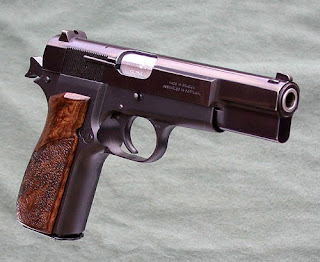 This refinished Mk III has flawlessly fired many, many rounds. It was "Assembled in Portugal". It continues to serve well and function flawlessly. I would trust my life and those of my family to it. 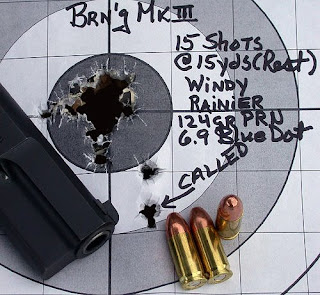 This is fairly typical of what I expect Hi Power Mk III 9mm pistols to do at about 15 yards. For me, this is accurate enough. These pistols were never intended as Camp Perry match guns. That said, I think that they offer very excellent service accuracy. This gun used to shoot the group in this picture was also assembled in Portugal.

Some of the T-series Hi Powers had a fine a polished blue as could ever be in my opinion but I am in no way convinced that they grouped any better or were any more reliable than current Hi Powers. I like both the "old classic" Hi Powers and the newer Mk II and Mk III pistols. I actually prefer the Mk III for a heavy-use Hi Power.

The older guns are getting harder to find to be sure and will only continue to do so. Find 'em while you can and buy them if you want examples of the earlier Hi Powers. I find them as gorgeous a pistol as has ever been made! Having said that, do not think that you have a "second-rate Hi Power" if you happen to have a "C" series, Mk II, Mk III or one of its variants.

Books by Stephen A. Camp

For those interested, my books can be found here:

...and I hope that you find this site both informative and interesting. I hope it is of service to the shooting community.

Please drop by the Handguns and Ammunition forum at: